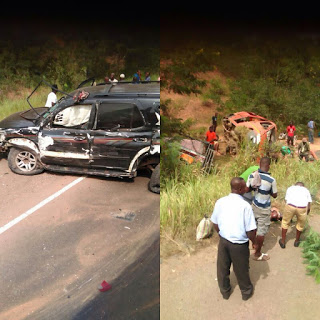 The accident occurred on the 9th January 2017 at exactly 2:10pm when a Pink Mercedes Benz Sprinter clashed with a Black Toyota V8 car.

It all happened when the Mercedes Benz Car with registration number
AS 8823-10 from Accra to Bogoso in the western region tried to save a mad person who was galavanting on the street where the driver tried to use the other Lane to save him….and rather resulted in a side clashed corrosion with the *Toyota V8* with registration number GT 170-15 also from Cape Coast to Accra at Gomoa Adam which is a few distance away from Apam junction (Ankamo) in the central region of Ghana.

After the cars clashed and summersaulted,
23 passengers including the driver and his mate were seriously injured including 3 students from Edinaman SHS, 1 from St Augustine’s SHS (Bogoso Branch,
W/R) and another 1 from Wassa Akropong JHS also in the western region of Ghana.
Children between the ages of 5-11years were also affected with serious causality whiles 4,1 & 2 have been referred to central regional hospital, Winneba and Korle-Bu respectively with the rest at Apam government hospital currently.

The Apam Police District Commander ASP Cephas Edzeani Confirms to the host of Osagyefo 106.1fm and it cherished listeners that no passenger has been confirm death as at Tuesday January, 10.