Bangs Entertain > Uncategorized > AFCON 2017: Adam Kwarasey could have gone to Gabon but…
Uncategorized

AFCON 2017: Adam Kwarasey could have gone to Gabon but… 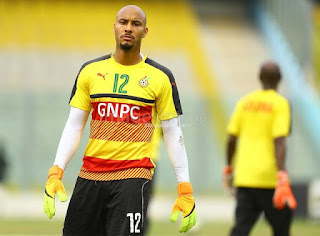 Ghana goalkeeper Adam Kwarasey says he could have travelled to Gabon with the Black Stars for this month’s Africa Cup of Nations but had to pull out of the team because he wasn’t sure of his fitness.
Kwarasey was replaced by Fatau Dauda after being named in the provisional squad for training camp in the United Arab Emirates by national team coach Avram Grant.
“It’s a minor injury but the reason I am not going [Gabon] is because I decided that it will not be fair to go if I am not sure I can contribute from day one. I was the one that said it’s better to have three available goalkeepers for a tournament as difficult as the AFCON. I could be fit during the tournament or right before it starts,” he told Pulse GH
“There is no surgery required; just treatment for lower back pains.”
Kwarasey, 29, won the Norwegian league title with Rosenborg last season .