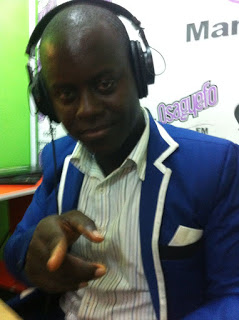 The 2016 CMA Best Promoter and the host of Entertainment Dig show on Osagyefo 106.1fm Philemon Kweku Buabeng popularly known in the media as Kweku Bee Abrante has confirmed criminals have broken into his apartment and stolen his items worth over GH2000 Cedis.

It all happened when after he left from mankessim to Agona Swedru last Saturday January 7, 2016 for weekends and returned Tuesday 10th January around 4:30pm to realized that, his main door has been broken and after entering into his hall found out that all his dresses have been searched and Splitten ajar in his room. After he had taken a thorough look into his wardrobe, he realized that his laptop, Voice recorder, Camera and many more has been taken away by an unknown criminals.

It has now become very tragic for Kweku Bee Abrante to take size as to whether he stays or relocate.

The matter is yet to be reported to mankessim police station for further interrogation. Any development on this case will be updated to you.