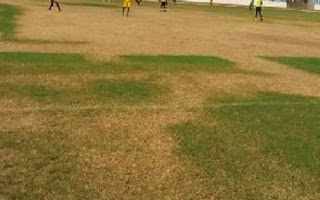 Green Grass Technology, the firm in charge of maintaining the pitch at the Cape Coast Sports Stadium, was not consulted prior to the hosting of a musical concert involving dancehall artiste Shatta Wale over the weekend at the facility, Frank Boahene, Chief Executive Officer (CEO) of the company, has disclosed.

The aftermath of the mega concert at the stadium on Saturday 18 February has left the green grass in a bad state with questions being raised about the maintenance of the multi-million dollar facility commissioned in May 2016.

“On Monday [20 February] when our workers went there, they saw the pitch in a bad state and wondered why the facility was in that state. Days before the concert, the pitch was in a fantastic state and so it came to us as a surprise. We consulted the Central Regional Sports Authority and were told Shatta Wale had a show there,” Mr Boahene told Class Sports, adding: “We were never consulted before the show.”

Mr Boahene noted that his office was in consultation with the Regional sports authority to find a solution to the problem that had arisen.