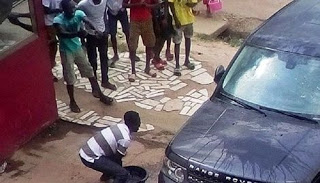 A dedicated fan of award winning artiste Sarkodie has shown genuine love to the musician.

The fan was captured washing Sarkodie’s Range Rover at the premises of Pluzz FM, when he headed to the studio of the station to grant an interview.

Other passers-by who were stunned at the young man’s love for the artiste stopped at the car park to watch him wash the car.

In 2015, Sarkodie was ranked the 19th most Influential Ghanaian by e.tv Ghana. He is considered one of the major proponents of the Azonto genre and dance.

Sarkodie is often named as one of Africa’s greatest hip hop artists. MTV Base ranked him 6th on its list of the Hottest African MC’s in 2014.

In 2015, The Guardian listed him as one of its top five hip hop acts on the African continent.