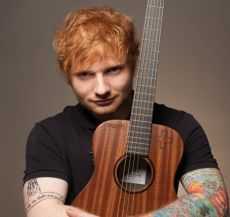 English Singer/Songwriter and occasional actor, Edward Christopher “Ed” Sheeran has revealed that he has recorded a Twi song for his upcoming album.

In a recent interview with BBC 1 Extra radio station, the Grammy Award winner expressed how fun it was to make music with the talented acts. He further added that his “Divide” album would feature other songs in Twi, which is an official language in Ghana.

He also spoke about the kind of drink that kept R2Bees and Fuse ODG very alert during studio sessions. He disclosed among other things that he has traveled around the world to several countries but Ghana is one of his favorite place in the world.

The “Thinking Out Loud” Singer said he really enjoyed his stay with Fuse ODG during his time in Ghana and his favorite Ghana food is Waakye.  He also added that he has tattooed the Ghana flag on his body.

Watch the full interview below: