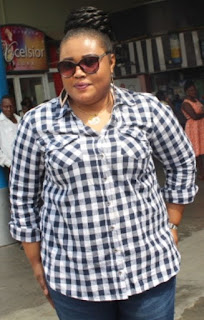 Ghanaian born UK-based gospel singer Ohemaa Jacky who conceived for popular Ghanaian gospel musician Brother Sammy has narrated to Zionfelix.net the agony she went through during the pregnancy period.

The “Hakuna Matata” singer thanked God for her life because she believes she would have been dead by now had it not been the intervention of God.

Ohemaa Jacky who is in Ghana to promote her first album revealed that she had a miscarriage after 7 months. She continued that she lost the baby after facing several challenges.

According to her, Bro. Sammy promised to destroy the baby so he believes the miscarriage was the will of God.

“Sammy’s issue was true but I didn’t want to talk to any media house because I was in a crucial moment then. I wanted God to save me first before I comment on the matter. It is true that Sammy impregnated me but because of spiritual matters, I lost the baby”. Jacky told Zionfelix.net

When Zionfelix.net asked if she aborted the unborn child, she replied “I’ll never abort a baby because in UK, they beg people to give birth when pregnant because they will cater for you. I face spiritual challenges and the man, Sammy also said he was going to kill the baby”.

Watch Ohemaa Jacky speak to Zionfelix.net at the Kotoka International Airport when she arrived in Ghana.