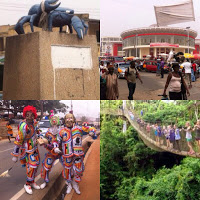 The ancient capital town of Ghana-cape coast and Fante land has been a town for tourist attraction where visitors come
day-in and day-out.

Many visitors are now in the central regional capital cape coast enjoying themselves and the outstanding display group on the street of cape coast and the bigger towns are the
“kakabotobi” which is called in English as *masquerade*.

Whiles these groups (kakabotobi’s) are on the street performing and dancing in exchange for a gift, market women/men are selling whiles the drivers are doing their serious transport business without forgetting the visitors touring as well.

Cape coast is known to have an acronym/symbol called kotokuraba meaning the warehouse or shelve of a crab in the center of the town.

The famous pub where this New year is “boiling” in cape coast and it’s surroundings include Hasciander,Oasis, Presidential Palace
(Samrit hotel),Sixler, Solace,Goil etc.

They are home and region of hospitality and memory worth repeating for tourism.