I am Married With Two(2) Children, I Don’t Seek Men – Kate Addo (Video) 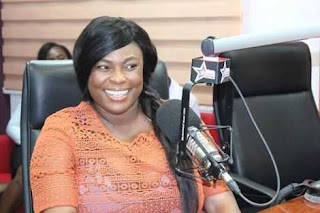 Acting Director of Public Affairs at Parliament Kate Addo has rubbished allegations that she is desperately expecting a proposal from an MP.

The alleged comments were reportedly made during a radio interview on Topfm.

According to media reports, Kate Addo revealed that no law maker has shown interest in her close to 14 years of service at the house.  She is also quoted by Topfm to have said that “As the new MPs they are in form 1 and am already in 6th form”, suggesting that she prefers the MPs that have ever served in the House.

The article further noted that she said she has no understating why it has been so, but suspects it to be a result of her general temperament.

In an interview with GhanaWeb, the Acting Director of Public Affairs debunked those assertions and insisted that her comments were taken out of context.

According to her, the remarks were made in a Radio programme on Topfm, the ‘Obaapa’ segment of Ghana Te Sen that celebrates accomplished women.

She explained that, in a response to a question posed about any misconduct of MPs towards women at Parliament, which she said wasn’t the case particularly in her situation as she has had very close relations with some MPs but none has behaved inappropriately towards her.

“I have been working in parliament for the past thirteen years and the past thirteen years I have had very good relationship some. And we all know that most MPS are male but I cannot say that one of them have behaved inappropriately with me. How that translate into somebody not proposing to me beats my imagination. I feel that it was most unfortunate.”

She disclosed that she has been married for close to thirteen years with twin sons and so there couldn’t be a case where she will be waiting for a proposal or have an affair with an MP.

She expressed disappointment that the messages of encouragement and motivation she gave to young ladies were thrown away and unfortunate news was made the headline of the interview.

“I feel like its most unfortunate. I would like to set the records straight. I did not say that. For the past thirteen years I have been with the same person, I have twin sons who turn eight in February, if I were single then it will make sense but I am not. Therefore I thought that it was very unfortunate that that was the headline that took the day instead of the important issue we talked about about how women can be emancipated in a society that is mostly patrilineal.”

She lamented the ordeal she went through describing it as an embarrassment to her and her competence.

Kate Addo asserted that these allegations will not take anything away from her efforts and desire to succeed and will continue to do her work as competently as she has without favour because of her sex.