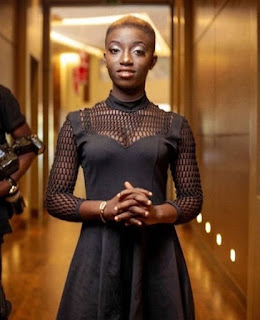 According to her, she listens to Shatta Wale’s songs and that is one reason for her ‘shatta’ attitude. In an interview on ‘The Big X Show’ with Real Eugene on Radio Univers, Rashida indicated that she listens more to Shatta Wale than any other artiste based in Accra.

Rashida Black Beauty earned the title ‘Malafaka’ Queen after a self-recorded video of hers verbally abusing her boyfriend who had jilted her went viral on the internet. In the video, she explained that Kush Man, her boyfriend had broken up with her after finding a lady with a light skin.

The ‘Malafaka’ Queen who is still in her teens could not fathom why her boyfriend would jilt her for another lady just because of the colour of the lady’s skin. She asserted that her dark skin together with other features made her more beautiful than the new found light skin lover of her ex-boyfriend. This led to her adoption of the name Rashida Black Beauty.

Rashida has stressed that the motive behind her viral video was not to verbally attack Kushman for jilting her but rather respond to insults hurled at her by Kushman and his new lover early on.

The JHS Leaver, who has gained so much attention in Ghana and among Ghanaians living abroad for her video which eventually won the most viral video award at the recently held Jigwe Awards, seeks to embark on public education with her Social Media fame. Together with her Manager, Mr. Awesome, she will use her influence, upon request, to educate young girls on the dangers of skin bleaching.

Rashida Black Beauty’s manager also indicates that the social media star has accepted some movie roles in Kumawood but will be furthering her education very soon.