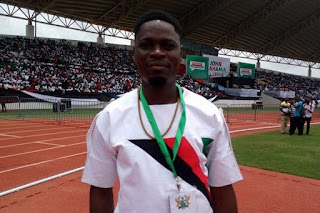 Dee Aja popular for National Democratic Congress (NDC) campaign song ‘Onaapo’, has disclosed that, even though he’s been enjoying some level of fame, he is sometimes scared for his life.
“Sometimes I’m afraid…so afraid that, when I wake up in the morning, I peep through my window to see if there’s anyone around before I step out,” he told JoyNews’ MzGee in an interview.
Aja who is a member of the ‘Asukuufo)’, a musical group put together by gospel musician and producer Nacee, he was appreciated for doing the song for his party.
“I don’t see the reason why people are so interested in what I got or didn’t get. If I’ve been given something, that is my money and if I’ve not been given anything, that is my personal problem. I granted an interview but didn’t say that I wasn’t given a penny.
“They asked me if I was contracted and paid to do the song and I said I wasn’t contracted and paid but I was appreciated because I did the song for my party,” he said.
Aja who had the opportunity to perform his hit single for President John Dramani Mahama and other influential guests in Lagos, Nigeria recently, expressed joy about his experience so far.
“Nacee is my boss, whatever he does for me, he is my father because when we talk about music, Nacee is everything to me… what he has done for me, the party hasn’t been able to do for me and that is more precious than money that someone will give me,” he said.
On performing for President John Mahama and other influential guests at the annual ovation carols, an event put together by Chief Dele Momodu, publisher of Ovation Magazine at the Eko Hotel and Suites in Lagos, Nigeria,” Aja revealed it was one of his cherished moments.
“I was so happy living my life in Eko hotel on an island in Nigeria. It wasn’t my first time in Nigeria but it was my first time living amongst the ‘rich’, sleeping in the same hotel with dignitaries.”