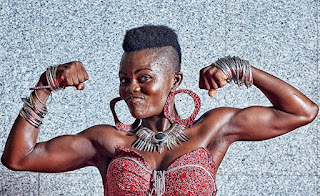 Afro-pop singer-songwriter Noella Wiyaala has never had sex.
The 28-year-old singer says no man has ever touched her and she plans to keep it that way until she is married.
Well known for her single ‘Rock My Body’ and androgynous image, Wiyaala told Joy Prime in an interview that “I’m a virgin…untouched. I’m just waiting for my husband to come and…” take her flower.
She made the revelation after she performed at a press soiree at the Peduase Valley Resort under the theme “Arts and Culture for a more sustainable social economic environment.”
Last year, Wiyaala’s looks became a subject of public discussion.
Wiyaala, who sings in the Sissali and Waale dialects as well as in English, reacted by saying she is not concerned about attacks on her looks.
She told Amanda Jissih on Showbiz Filla on Hitz FM that, “For me now, my skin is like rock, I don’t care. Why I don’t care is that…I know I have thousands of people who like me so why should some probably 50 people bother me with ‘you are ugly’” comments?