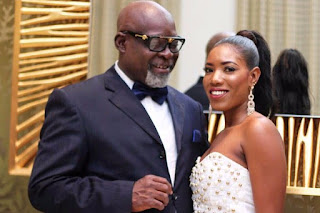 Actress Victoria Lebene Mekpah has revealed that she and her actor fiancée, Kofi Adjorlolo still have some things to sort out before their anticipated marriage comes off.
“We are still preparing. We have a little hitch here and there and that’s what we’re trying to sort out before we boldly come out to say yaay, finally we’re having something,’’ she said.
The actress in response to what she thought about Adjorlolo’s claim that his children will play a major role in determining who his next spouse would be, said his children knew about her and are comfortable with her.
In a conversation with Joy News’ MzGee, Victoria, of ‘The Next Movie Star’ 2014 fame, debunked claims that their public marriage announcement has become a rope tying them down to by all means fulfill their plans.
“We can’t just turn up and make news and nothing happens…there was something going on and plans…and that’s how come we came out. So, if it’s not coming off as planned” then the public should know that there’ve been some challenges.
According to the actress, the age difference of about 40 years between her and Kofi Adjorlolo is not an issue because they are compatible.
Miss Mekpah, however, admitted that her fiancée had given her an ultimatum of up to the end of January to finally make up her mind and finalise her plans.
Award winning actor Kofi Adjorlolo in an interview with Joy News late last year disclosed that they were still shopping for the wedding and that the much-anticipated ceremony would come off soon.