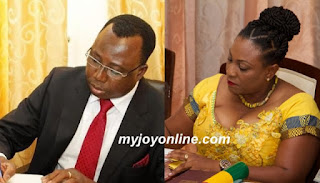 President John Mahama has confirmed two new appointees to head two pro-democracy state insitutions, the National Comission for Civic Education (NCCE) and Commissioner of the Commission on Human Rights and Administrative Justice (CHRAJ).
At a brief ceremony at the Flagstaff House Tuesday, the out-going President swore-in Jospeh Akanjolenur Whittal as the new head of CHRAJ and Josephine Nkrumah to head the NCCE.
Both were deputies in their respective institutions and were in acting capacities as heads of the two institutions until their confirmation.
Ms Josephine Nkrumah until her acting capacity role was also Deputy chairman, Finance & Administration.
She has been in an acting capacity role for more than a year  following the exit of Madam Charlotte Osei who was moved to head the Electoral Commission in July 2015.
Josephine holds a BA (Law&french) from the University of Ghana.
This is the second promotion for Josephine in less than 19 months.

President Mahama first appointed her deputy chair on April 1, 2015 at a ceremony at the Flagstaff House in Accra.
There was a similar situation at CHRAJ. Joseph Akanjolenur Whittal until his elevation to head CHRAJ, was a deputy commissioner for more than four years.
He was appointed deputy commissioner by the late President John Evans Atta Mills in 2012.

Mr. Whittal suceeds Vivian Lauretta Lamptey who was sacked following allegations of abuse of office. The position officially became vacant on November 4, 2015 – more than a year.
His report on the controversial Ford gift saga exonerated the President of bribery and conflict of interest.
Joseph Whittal has been with CHRAJ since 1993, rising to Director of Legal  and Investigations to deputy commissioner and currently the head of the human rights body.

Mr. Whittal attended the University of Ghana from 1985 to 1988 where he obtained a Bachelor of Laws (LLB) degree and was called to the bar in 1990.
He also has a Masters in Democracy, Governance and Law (M.A, DGL) from the University of Cape Coast, Institute for Development Studies.