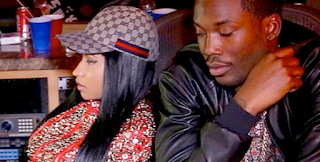 A little over a week ago he deleted his Instagram page. Then shortly after that heposted a photo of a semi-naked mystery woman.
If you haven’t figured it out yet, we’re talking about Meek Mill and his rumored breakup with Nicki Minaj. Now Bossip reports that the Philly rhymer has been cheating with a woman named Sonye Princess — who may be the semi-naked mystery woman.
According to the report, he also brought the woman her own boutique, which she now owns and runs.
In addition, the gossip site stated that Meek and the Young Money queen have indeed called it quits, and they’re no longer living together. They’ve even un-followed each other on Instagram.
Sonye Princess’s rep (because she has a rep) has since denied that she and the DreamChaser are involved.  But that hasn’t seemed to remove people’s suspicions, and it’s unlikely the chatter about Meek cheating will stop anytime soon.
Post Views: 31