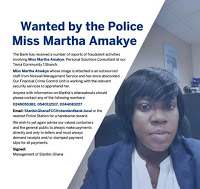 Stanbic Bank posted a flyer on its Facebook page, bearing a photo of Miss Martha Amakye, indicating that she was wanted by the police.
The bank stated that Miss Martha Amakye, a Personal Solutions Consultant had been running a fraudulent operation from their own premises, Tema Community 1 Branch.
And in a typical employer ‘runway’ from liability manner, Stanbic added that Martha Amakye is an outsourced staff—meaning, she was an agency staff and not a direct employee of the bank.
That’s pretty stupid and unnecessary to state: as if it makes what she did right or will in any way mitigate the gargantuan loss suffered by the many who trusted the bank to effectively check the activities of its employees, especially when being run smoothly from their own premises.
After speaking to a few people, I’ve fairly gathered what happened as the this:
Apparently, Miss Martha Amakye who was recently awarded as Stanbic Bank’s star banker of the month and with her photo gigantically plastered at their Tema Community 1 has for many months been running a scheme from the comfort of the bank—an enterprise the bank now claims to have had no idea about. Miss Martha Amakye is said to have successfully signed up several customers to some sort of high-interest investment package—where she promised them that the low-key investment package being run by Stanic rewards customers with as much as over 14 percent monthly interest on their deposits.
From what I am told, many that trooped to be signed-up met her at the bank and in broad day light, she signed them up—giving them dozens of what seemed like Stanic bank’s official documents to sign.
According to a young woman who wants to remain anonymous, “Martha actually opened bank accounts for individuals who signed up for her special investment package and deposits were made normally at the counter into these accounts.”
Interestingly, it emerged during my conversation with the above person that, some people actually got a bit of the said interest paid—and they even received alerts of interest payments via text messages, such as banks normally do in Ghana. Therefore, from a normal unsuspecting customer’s perspective, the scheme was genuine—considering the obvious fact that the signing up for many took place at a recognised Stanbic Bank branch. And also what was more re-assuring was the fact that you could easily see Martha’s poster/picture of having been awarded the “best/star” employee of the month the moment you enter the banking hall.
Who will reasonably doubt such a person selling an investment package to you in a bank?
The question I kept asking during a related conversation is: what is Stanbic Bank going to do about all the monies Martha Amakye, their own worker even if she was outsourced from an agency has brilliantly swindled customers out of?
I wouldn’t be far from the truth if I say, it’s going to be a touch battle for those who have lost their monies, in light of Stanbic Bank’s posture, on the back of the fact that they saw it necessary to mention that this beautiful thief was not really their direct employee—somewhat thinking it makes them less culpable.
Reasonably, it doesn’t matter if Martha Amakye was directly employed by Stanbic Bank or was an outsourced staff. The ordinary customer does not care about such technicalities, mainly instituted to escape certain legal liabilities and f*ck-ups like this.
To the victims of this scam, Martha represented Stanbic Bank, used the bank’s premises and stationaries to run what seems like a mini-Ponzi scheme in an open manner—in a way any reasonable supervision from the bank would have exposed it. Thus, whether she was an in-house or agency staff is completely irrelevant—and that shouldn’t even have been mentioned at all.