Obour’s Performance Reflects On The Shape Of His Belly – Kontihene 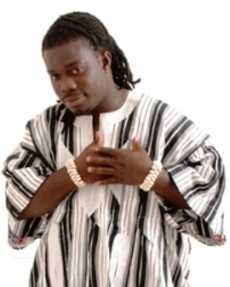 The ascension of Bice Osei Kuffour aka Obour to the Presidency of the Musicians Union of Ghana (MUSIGA) was heavily heralded, mostly for the fact that, he was expected to come in with a high level of youthly exuberance, ingenuity and innovation that would catapult the Union to higher ground.

Since 2011, the Presidency has not been a smooth ride for Obour as he’s faced challenges and criticisms – some genuine and appropriate, others being totally inane! Just like any other administration, Obour has had issues and those gnawing issues have been trumpeted by music industry stakeholders over the years.

Amazingly, in the last two or so months, he has come under some severe cynicism by fellow musicians on his stewardship; from Shatta Wale to A Plus and now, Kwaisey Pee is also firing salvos.

Check out some of their outbursts;

Kwaisey Pee, in chiding Obour and calling his administration the worse ever, was also ballsy enough to make comparisons to the administration of the Ex-President of the Republic of Ghana, John Mahama. “Obuor’s administration is like the NDC government led by the former President John Mahama which was kicked out, full of incompetence,” he stated.

Shatta Wale, typical of his brand, also goes on a twitter tirade and takes Obour to the cleaners. “Ok Obuor is about to go. Musicians are fed up. Obuor is a disappointment to the youth. No musician should lie about this, we are suffering. Obuor is big gold digger in our music industry. Musicians are crying,” he posted.

Then came A Plus, who was audacious enough to call for the impeachment of Obour by writing an open letter addressed to Hammer of the Last 2, documenting the many ‘ills’ in Obour’s tenure and calling on music stakeholders to kick him out. A Plus called for Obour to account for the rent being paid by some Church using the Union’s premises for worship, account for previous Ghana Music Week events and accounts of the Gh c 2million budgetary allocation from Government.

*First of all, these musicians have every right to criticize Obour and his administration, regardless of whether they are active members or not – because, one of the aims of MUSIGA as captured in its Constitution, is to protect the creative and performing rights of all musicians in the country. It didn’t say ‘members’.

However, these musicians grousing over Obour and his so-called failures are just being a nuisance. They are noise-makers who are becoming overly irritating and their ravings are just nauseating!

Most of these guys are well-learned, well-read and with sharp minds but unfortunately, some of them sound like dullards when it comes to industry-related issues. They do not know which groupings are responsible for what. They mix up copyright, welfare, performance and other issues relating to musicians, so – they lay blame on Obour for everything that goes awry in the industry.

Unfortunately for the naysayers of Obour’s administration, they have no choice but to shut up and endure the ‘bad’ leadership for the next two (2) years when his second term comes to a close.  You can’t impeach him with such frivolous claims and you surely cannot prosecute him with such flippant accusations. What is most irksome about these guys always on the neck of Obour is that; they knew that he was incompetent, irresponsible, corrupt and greedy as they always assert, yet, they gawked as he was re-elected into Office in 2015 for another 4-year term.

This means that, this bunch of cowards, who couldn’t do anything to affect the outcome of the elections can bark all they want, and Obour will continue to head the Union till 2019 – deal with it!

Annoyingly, some musicians have always been blurting about Obour and his refusal or inability to account for most of the activities the Union engages in, but, these same musicians do not know how many page numbers are in the MUSIGA Constitution.

Let me edify these lazy musicians who do not read what the Constitution says about accountability;

I am not Obour’s publicist and also not the Communications Director for the Union, so, I won’t waste my ink and tout the good things he’s achieved for the Union for the past 5 years in Office.

His administration has flaws; the communication wing of the Union has been lukewarm and sloppy for years, the Electoral College has loopholes in its structure and there are clauses in the Constitution that must be looked at, and of course, not all the activities Obour has embarked on has been meaningful to members.

Shouting on Facebook live won’t affect any change, ranting on twitter won’t send Obour away and casting slurs on his personality will not reduce his monthly allowance as President of the Union.

If you want change, become an active member of the Union, deal with the constitution, call for amendments and help correct the challenges the Union face. If you crave for change, stand for elections or put up and support somebody who can cause changes you want.

The next congress to elect a new President for MUSIGA will be in 2019, either you put or shut up!