Patoranking To Perform At Sarkodie’s Rapperholic 2016 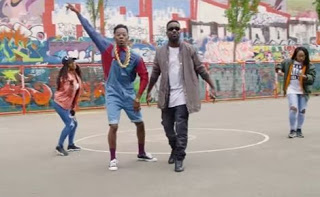 Nigerian Afro dancehall artiste Patoranking is set to rock the with Sarkodie at his annual Rapperholic Concert.

The event will parade top acts in the country and beyond. A glowing list consisting R2Bees, Tee Phlow, FlowKing Stone, Guru, Article Wan, Edem, Efya has already been announced.

The two whose song No Kissing Baby is making waves on the continent will for the first time perform the song together in Ghana after their impressive performances at MAMA’s.

Slated for December 25, the highly-patronized event is the rapper’s Christmas present to his fans.

Rapperholic is also the name of Sarkodie (born Michael Owusu Addo)’s sophomore album, and he’s reportedly finalizing work on his fifth solo album “The Highest”, which comes out early next year.

Recipient of several local and international awards including the prestigious BET Best International Act: Africa in 2012, Sarkodie has released Makye (2009), Rapperholic (2012), Sarkology (2014), Mary (2015), as well as the joint album TMG with producer Jayso in 2013.