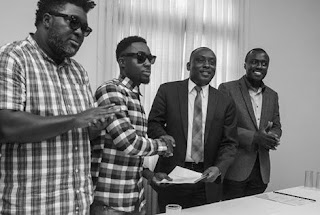 At a press conference held at the Coconut Grove Regency Hotel in Accra to announce the deal, the ‘fante rapper’ expressed his excitement about the deal and hinted on some of the positive additions the deal will add to his brand.

“This is the day the Lord has made we will rejoice and be glad. I am happy to be entering into this partnership with Spyder Lee Entertainment and i know it will take me places. A lot of people are already craving for more from me and I am optimistic that next year will come with a lot more. I am going to give the fans all that they deserve with the new team”, he said.

According to the Supervising Manager of Spyder Lee Entertainment, Mr. Richmond Lamptey, “the management deal is expected to take Teephlow to the next level of his career and that is what together with his team, we aim to achieve”.

The event was attended by key stakeholders within the music space including Hammer of the Last 2 Music Group and MUSIGA President, Bice Osei Kuffour. Other executives of Spyder Lee Entertainment and Group Nduom present at the event included Mr. Kweku Nduom, Vice President of Groupe Nduom and Mr. Edwin Edinkrah.