The biggest beefs/diss songs for 2016 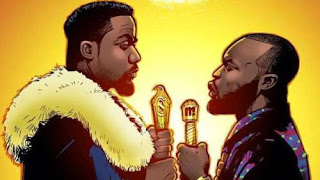 As humans, we are bound to engage in disagreements, divergent opinions and scuffles and they culminate into ‘beefs’ – and as artists, one of the best ways they express their disdain or contempt for each other is via ‘diss’ songs, – we can state!
The year 2016 witnessed some beefs/diss songs but just a few made the headlines and got almost everybody interested.
Here, we have outlined the biggest, headline-grabbing and most-talked-about beefs/diss songs in Ghanaian music for 2016 – and they are in numerical order with a verdict on eventual winners.
Of course, this is our compilation, you can agree, disagree or add your list, however, if you still have an issue with our list, you can go hug a transformer!
4. Kaakie Vrs MzVee
There was talk of ‘beef’ between the two leading female dancehall acts, who were said to be feuding over the bragging rights to the title, ‘Dancehall Queen’.
The supposed beef came to the fore when Kaakie released the diss song, ‘Sankwas’ – taking shots at other females in the fraternity.
MzVee responded with shots on her own with help from E.L on the track, ‘Make I Shine’ – a song that got Kaakie riled up.
The second diss song from Kaakie was not pretty. It took direct salvos at MzVee and E.L was not spared in the assault.
Winner: Kaakie (For the zeal, confidence and guts displayed in the diss dongs coupled with strong wordplay)
3. Shatta Wale vs. Criss Waddle
The one-time good friends fell out when the fans of Shatta Wale passed on some insinuations on the boss of AMG Business. After accusing the dancehall ‘supremo’ of his refusal to check his fans, Criss Waddle released the diss song, ‘Opana’.
Of course, a response was highly expected and when it finally dropped, it did fit the hype. ‘Don’t Try’ from Shatta took shots at Waddle’s street credibility and sexuality.
The SM fans drilled the final nail to Waddle’s coffin with various memes on social media.
Winner: Shatta Wale (the song was a banger; dance-able tune with career-threatening jabs that left his foe bruised)
2. D-Black vs. Wanlov
For some time, D-Black had suffered all manner of cynicism from his former friend, Wanlov Kubolor but never responded, but, when the latter raised issues with D-Black’s inclusion on MTVBase Africa’s list of the ‘Hottest MCs in Ghana’ – it was a call to action.
D-Black’s diss track, ‘The List’ was unexpected. It was different as it came as raw as the 1960s hip hop battles on the streets of Harlem – no beat box, no production.
The ‘diss song’ virtually tore Wanlov into pieces; an assault on his relevance as an artist, his struggle with family, monetary issues and his sexuality.
Wanlov’s delayed reaction took the excitement out of the ‘battle’ and his response- ‘Ah Well’ was a good effort but was not venomous or lethal. His references to the late Komla Dumor and D-Black unable to write his own songs were weak.
Winner: D-Black (It was different and fierce, had so many holes being punched in Wanlov’s persona and the flow on was point)
1. Sarkodie vs. M.anifest
When two elephants get into a fight, it is the grass that suffers – our elders say. In this case, when two lyrically-gifted artists were engaged in a lyrical battle, there was no affliction on the fans but inestimable excitement!
This beef got the whole Ghana talking; from Kumasi to Bole –Bamboi to Asankragwa. Even Politicians were all roped into the feud for lyrical supremacy.
‘Bossy’ by Sarkodie was somehow misinterpreted by M.anifest as a mention was mistakenly thought to be a diss.
That resulted in the making of one of the biggest diss tracks, ‘godMC’ by M.anifest who took strong subliminal shots at Sarkodie.
The response diss song from swift, maybe too quick as ‘Kanta’ was supposed to neutralize the waves ‘godMC’ was making but it ended up giving M.anifest more prominent.
There was no qualms about the lyrical dexterity that was exhibited on the 2 diss tracks, but, ‘Kanta’ was subjected to too much lyrical scrutiny and that, is not good for any lyrical battle.
Winner: M.anifest (Nobody has ever come at Sarkodie as hard as M.anifest did. The bravado, the classy wordplay and punchlines were over the top and regardless of what Sark Nation fans did to sway opinions, it was too late – their ‘King’ had tasted his first L).