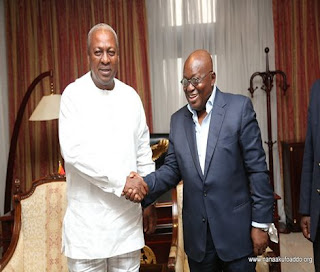 Members of the Respective Transition Teams

We are met here this afternoon to give effect to the decision that the Ghanaian people took in all serenity and dignity on 7th December, 2016. We are doing so within the confines of a new law, which is being brought into play for the second time. Unlike the first time in 2012, which saw the law being applied in an internal manner, that is in a transition from the same ruling party to itself, this time the transition is from one ruling party to another.

This changes the dynamics of what has been done before. Fortunately for us, this third time when we are experiencing a change of government from one party to another, we are doing so without the pressure of a run-off. In 2000, we had a run-off to settle the issue. Again, in 2008, we had another run-off to settle the issue. This time a run-off has been avoided, which means that we have sufficient time to do a complete and thorough job. With genuine co-operation and openness, that objective can be realized. I would entreat you, members of the respective transition teams, to let co-operation and transparency be your guiding watchwords.

I am aware that the mandate of His Excellency the President will run till 7th January 2017, and that government is a continuing business. It is important though, that decisions that are taken between now and then are guided by the national interest.

I have so far received full co-operation from His Excellency the President, for which I thank him and I hope and expect that it will so continue until the formal transfer of authority takes place on 7th January next year. In the meantime, I wish you the best of luck in your endeavours. The Ghanaian people are expectant. I am sure you will not disappoint them.