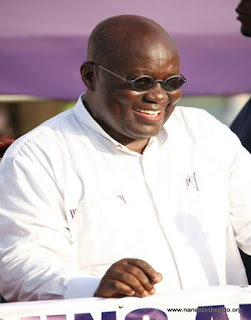 President Nana Addo Dankwah Akufo-Addo’s religious side is a secret.

His strong Christian beliefs reflects in almost every important step of his life.

Still in a thanksgiving activities after his election victory, Nana cannot seem to get enough of the gospel thanksgiving song, ‘Oye’, even before his unprecedented victory.

During the New Patriotic Party’s final rally at the Trade Fair in Accra before the December elections, Nana Akufo-Addo, then presidential candidate was captured dancing gracefully to the song.

Watch the video below:

The song was played again when the President arrived at the Independent Square for his inauguration ceremony.
He was seen to be singing and gently moving to the rhythm of ‘Oye’ when the song was repeated during the recession of the New Year School at the University of Ghana where he was the guest speaker.

His visit to the school also served as the first official visit to a tertiary institution as President of the Republic.